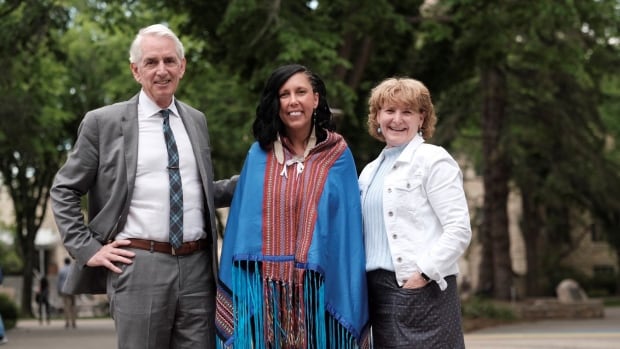 The University of Saskatchewan and the Canadian Institutes of Health Research (CIHR) continue to support Carrie Bourassa, despite a CBC investigation that shows her claims of Indigenous ancestry to be false.

For years, the U of S professor, who is also the Scientific Director of the Indigenous branch of CIHR, has claimed to be Métis, Anishnaabe and Tlingit. However, investigations by Indigenous academics and the CBC found there was no evidence of this.

After being confronted with the findings of the CBC investigation, Bourassa changed her story in an email response before the CBC investigation was released, claiming she was mixed race because she was adopted by a friend Métis from her grandfather when she was in her early twenties. This seems to directly contradict many of his previous public claims.

In a Saskatoon StarPhoenix article published on Saturday, Bourassa said she did not have documentation to prove her many claims of indigeneity, but insists she is not lying. She said she hired a genealogist two years ago to help her search for evidence, and the work is underway.

Asked about her public claim that her great-grandmother was Tlingit, Bourassa said she hopes to find evidence at some point.

“Maybe I can find a Tlingit ancestor somewhere. Maybe I will, maybe I won’t,” she told the StarPhoenix.

Bourassa has continuously declined CBC interview requests. On Saturday, she said she was now directing all inquiries to her public relations representative.

Despite all of this, after the CBC article was published, the U of S and CIHR issued statements of support for Bourassa.

In an email Wednesday, following the publication of the CBC investigation, CIHR said it “values ​​the work of the Institute of Indigenous Peoples’ Health under the leadership of Dr. Carrie Bourassa.”

“With respect to Dr. Bourassa’s identity, we recognize that Indigenous identity is complex, multifaceted and deeply personal and we support Indigenous self-identification. “

This means that CIHR considers a person to be truly Aboriginal if they claim to be, based on what is essentially an honor system.

In its statement, the U of S, located in Saskatoon, said it recognizes that “self-identification is no longer sufficient for Aboriginal-specific appointments.” However, the university said Bourassa was not hired because of his claims of indigeneity.

Calls for the dismissal of Bourassa

Sinclair, a Cree, Assiniboine and Saulteaux woman from George Gordon First Nation, says that because of this deception, Bourassa should do the right thing and resign, or that institutions should consider their options.

“There are people in the [United] States that have been asked to resign or be fired due to fraudulent identity claims. And I don’t really know why our institutions are different, ”she said.

The university’s lack of action infuriates Winona Wheeler, a professor of indigenous studies at the U of S, who was part of a group of professors who have investigated Bourassa’s genealogy.

“She lied about her identity. She lied,” said Wheeler, a member of the Fisher River Cree Nation in Manitoba. “And the university stands for that.”

Wheeler said that no matter how good Bourassa has done with her research and leadership, the university has nothing to do to support her now that the truth is out.

In its statement, the U of S said “our intention remains to be transparent, open, respectful and willing to learn so that we can move forward together in meaningful and collaborative ways.”

But Wheeler says that doesn’t ring true, pointing out that the institution has known about Bourassa’s deception for months. A detailed official complaint from a Métis professor at the U of S was submitted to the university administration, along with pages of evidence. According to Bourassa, the university rejected this complaint.

“They could have taken care of it months ago, but they pushed us away. So I don’t believe them,” Wheeler said. “We told them, ‘You’re going to have a blast here someday.'”

“They close their eyes to the lie”

As U of S and CIHR say it’s up to Indigenous people to determine who is truly Indigenous, retired Cree lawyer Michelle Good says their actions don’t match their words.

She points out that Bourassa publicly admitted that she was not a citizen of the Métis Nation — Saskatchewan (MNS).

And yet, in a public statement released after the CBC story was published, MNS Chairman Glen McCallum said, “In Saskatchewan, determining ‘who is a Métis citizen’ is the sole decision of the Métis nation— Saskatchewan and no one else.

Well, the author of Five little Indians, winner of the 2020 Governor General’s Literary Award for English-Language Fiction, said that given Bourassa’s admission and MHS’s statement, she wonders why the U of S and CIHR accept the assertion of Bourassa that she is Métis.

“If a person cannot even meet the standard of what the Métis have set themselves to be Métis, how can we accept that they are Métis? Well said.

She said it’s incredible that in the face of the CBC investigation and Bourassa’s admissions, the university and CIHR decided to support her.

“They turn a blind eye to the lie, and instead of acknowledging that there was a fundamental dishonesty at the very beginning of all of this with Dr. Bourassa, they step back,” Good said.

Self-identification is no longer enough

Many stories of people mistakenly assuming Indigenous ancestry have gained national prominence in recent years, and a number of high-profile scandals have sparked calls for increased accountability.

“Self-identification can no longer be used as the sole basis for claiming Indigenous identity due to the widespread fraud that is currently taking place,” he said.

Leroux said he was shocked that CIHR, a federal agency that funds much of Indigenous research in Canada, was prepared to support Bourassa despite his admitted lies.

“CIHR is considered one of the leaders in developing strong ethical protocols, especially when it comes to research with Indigenous peoples,” he said. “The fact that they have someone leading the funding for Indigenous health research, who is involved in such deception and lacks integrity, I think puts this whole apparatus into question.”

Leroux said Bourassa heads an organization that provides much of the funding for Indigenous research across the country – including funding for projects involving Wheeler and Métis Professors Caroline Tait and Janet Smylie, who have all spoken out publicly against Bourassa. in the CBC survey.

“So she has a say – and I’m not sure how much – but who gets the research funding,” he said. “And we’re talking about some of these projects for millions of dollars.”

Speak up, despite the risk

Jaris Swidrovich, Assistant Professor of Pharmacy at the University of Toronto, was so troubled by what CBC found that he decided to speak out publicly, despite relying on the Indigenous branch of CIHR under the management of Bourassa to finance his research.

“We are all very familiar with the saying ‘nothing about us without us’. And I felt that was followed when it comes to the Institute for Indigenous Peoples’ Health,” he said.

Swidrovich, of Saulteaux and Ukrainian descent, said he felt betrayed and sickened after the revelations about Bourassa. And he feels compelled to speak up.

“It’s really scary… Especially for pre-tenured academics like myself. We’re in a very difficult position when it comes to standing up for what’s right versus… in balance with our own careers. “, did he declare. noted. “I am concerned that my career path, like many others, may be affected by standing up for what is right.”

But Swidrovich said the issues at stake are so fundamental that silence is not an option.

“I have to remember who am I here for?” Why am I on this path? And what is my responsibility as an Indigenous scholar? And it is towards my community and my people, ”he said. “So, as scary and as difficult as it may be to expose myself, I have to do it.”