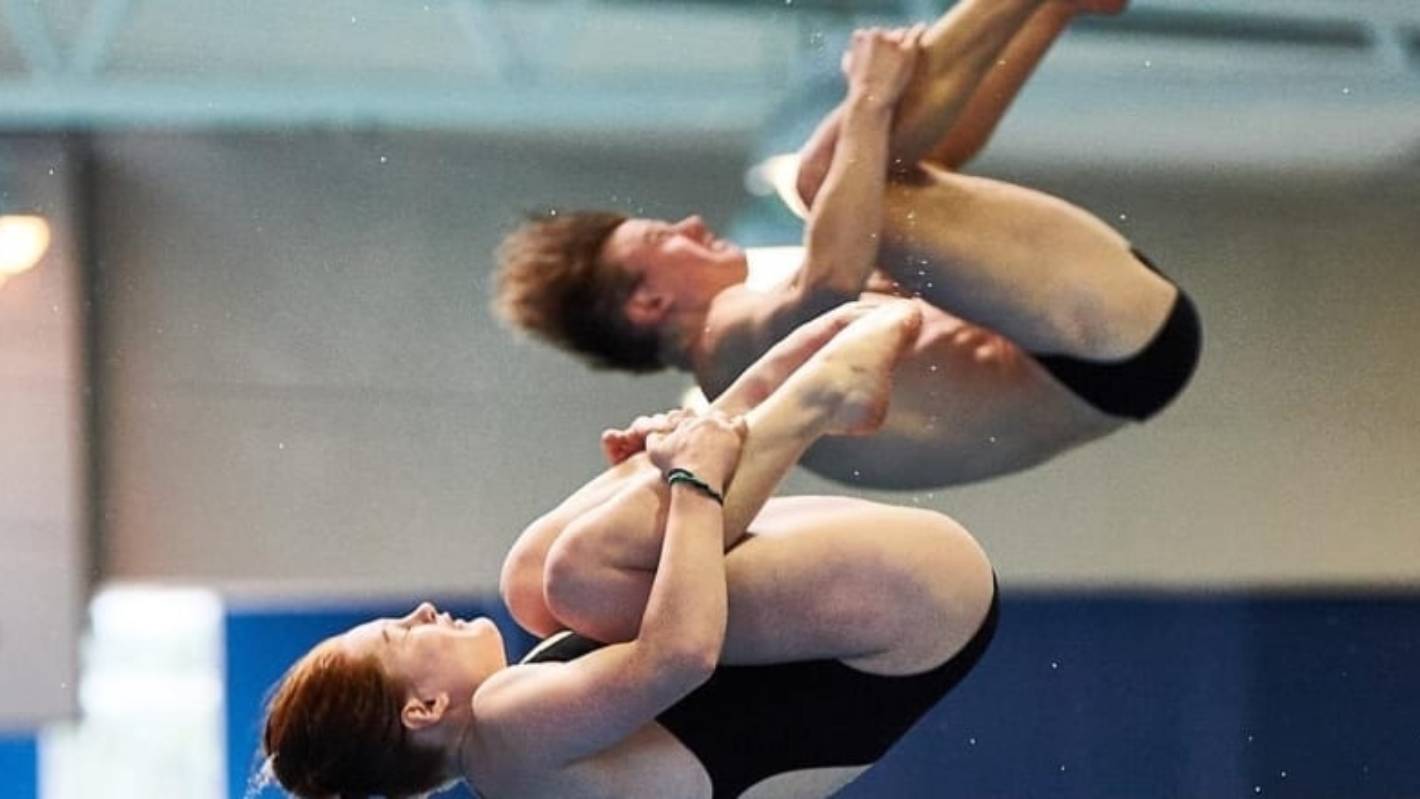 New Zealand’s youngest Commonwealth Games team athlete Maggie Squire, 16, is ready to make a splash in the diving world. And she has a “good buddy” who will be right next to her, in the air.

With a four-year age gap and a significant height difference, they form an unlikely duo for synchronized diving.

But Maggie Squire, 16, and Frazer Tavener, 20, are a great pair – set to compete in their first Commonwealth Games after just a year of diving together.

They have also become good friends and are looking to follow the same path outside of the pool, to become engineers.

Tavener and Squire will compete in the mixed 3m synchro in Birmingham – with the highly technical event included in the diving program for the first time at the Games.

Squire, who is the youngest athlete on Team New Zealand’s Commonwealth Games so far, loves the event despite its difficulty.

“It’s definitely a higher level that you have to dive into,” she says. “I have to try very hard to jump to be able to reach the same height as Frazer.”

For Tavener, it’s often about using less power and height to get their dives perfectly timed. He can adjust the fulcrum of his board for stiffness.

“I have to make the board very stiff when I’m synchro just to try to keep everything in time, keep the same height and make sure we hit the water at the same time,” he says.

For such a recent couple, Squire and Tavener gel very well – both in diving and out of sport.

“When we started doing it, we didn’t know we would be good enough at it. So that was a bit of a surprise,” Squire laughs.

Tavener agrees. “We get along pretty well, so it’s going to be fantastic to be able to share this experience with someone who I’m good friends with.”

Squire, now in Year 12 at Takapuna Grammar School, has managed to balance diving with her academics, even doing Level 3 subjects this year in order to graduate a year early.

She hopes to study engineering next year (but is considering a gap year first), after being inspired by Tavener, who is studying part-time at the University of Auckland.

Tavener is full of praise for his discreet and unassuming diving partner.

“She is incredibly smart, really driven, both in and out of diving. She is also very kind to others, she really wants the best for others,” he says.

Squire competes in the 1m and 3m springboards in Birmingham – two events she recently won at the New Zealand National Diving Championships.

She started making a splash on the world stage at the end of 2019, at the age of 14, during her first FINA Grands Prix. In Kuala Lumpur, she reached the semi-finals, finishing sixth in the 3m springboard.

Just as her senior diving career was taking off, the Covid lockdown hit and Squire was restricted to training on Zoom.

“It was really, really difficult; these are very big comps [the Grand Prix] and they have been an amazing experience,” she says. “The fact that Covid arrived at that time really blocked physically and mentally the training that I could do.”

When lockdown restrictions eased a bit, Squire and his fellow Auckland divers were able to get out of the house and use what was available – jumping from backyard trampolines into swimming pools, and even from the dock at Murray’s Bay on the north coast of Auckland.

Returning to training after all levels of Auckland lockdown, Squire quickly regained his world-class form.

“I had even more love for the sport than before and it was so exciting to be back,” she says.

Squire will be away from home and school for eight weeks – first for the world championships in Hungary in a fortnight, then a Grand Prix in Italy, followed by a training camp with the Australian team of diving in the UK ahead of the start of the Commonwealth Games at the end of July.

Fortunately, they are a tight-knit group. “Everyone who comes with me is really close friends,” Squire says. “We train together every day, so it will be a really great trip.

“It will be really exciting to meet the other athletes of the New Zealand team [at the Games] and tell them about what they are doing.

Squire recently received a FINA Development Grant, which will help cover travel and training costs for one year.

“It was really exciting news. It’s really helpful to know that I can go to these big competitions which will give me so much experience for the future,” she said.

In addition to the support of her family, who push her to train every day, Squire is also sponsored by Mike Walczak and his company Signify, who have helped her compete overseas.

At the world championships in Hungary, Squire will compete in the open women’s 1m and 3m events, as well as the mixed synchrony with Tavener. And she could team up for the synchronized platform with 17-year-old Mikali Dawson, who competes in the 10m platform in Birmingham.

“It will be so amazing to dive with all the best divers in the world, it will be so cool,” Squire said. These will be his first world champions.

“I’m definitely a little nervous because it’s a huge opportunity. But I just want to go out there and do my best and see how well I do.

Despite his youth, Squire has been diving for about eight years; her promise first spotted by her swim coach when she was diving at the start of a race.

“I certainly wasn’t the most naturally gifted diver when I started, but after a lot of training and loving the sport I started to improve a lot,” says Squire, who competes in the championships. nationals since the age of 12.

Getting the call to say she was going to Birmingham was “super exciting”, but also a weight on her chest after balancing diving and school for so long. “It was also a big relief after doing so many tries and competing – it was a lot of hard work. It was just a relief to finally be like ‘Oh whoa, I made it’.”

While Squire’s study and work plans next year are still up in the air, one thing is certain is his continued rise through the diving ranks.

Tavener, who has been diving for seven years, knows Squire has a bright future.

“It’s fantastic to be able to see someone four years younger than me entering the senior scene at the same time with so much potential,” he said.

“She is definitely going a long way, arriving at such a young age and setting the bar so high. I’m excited to see the career she can make for herself.