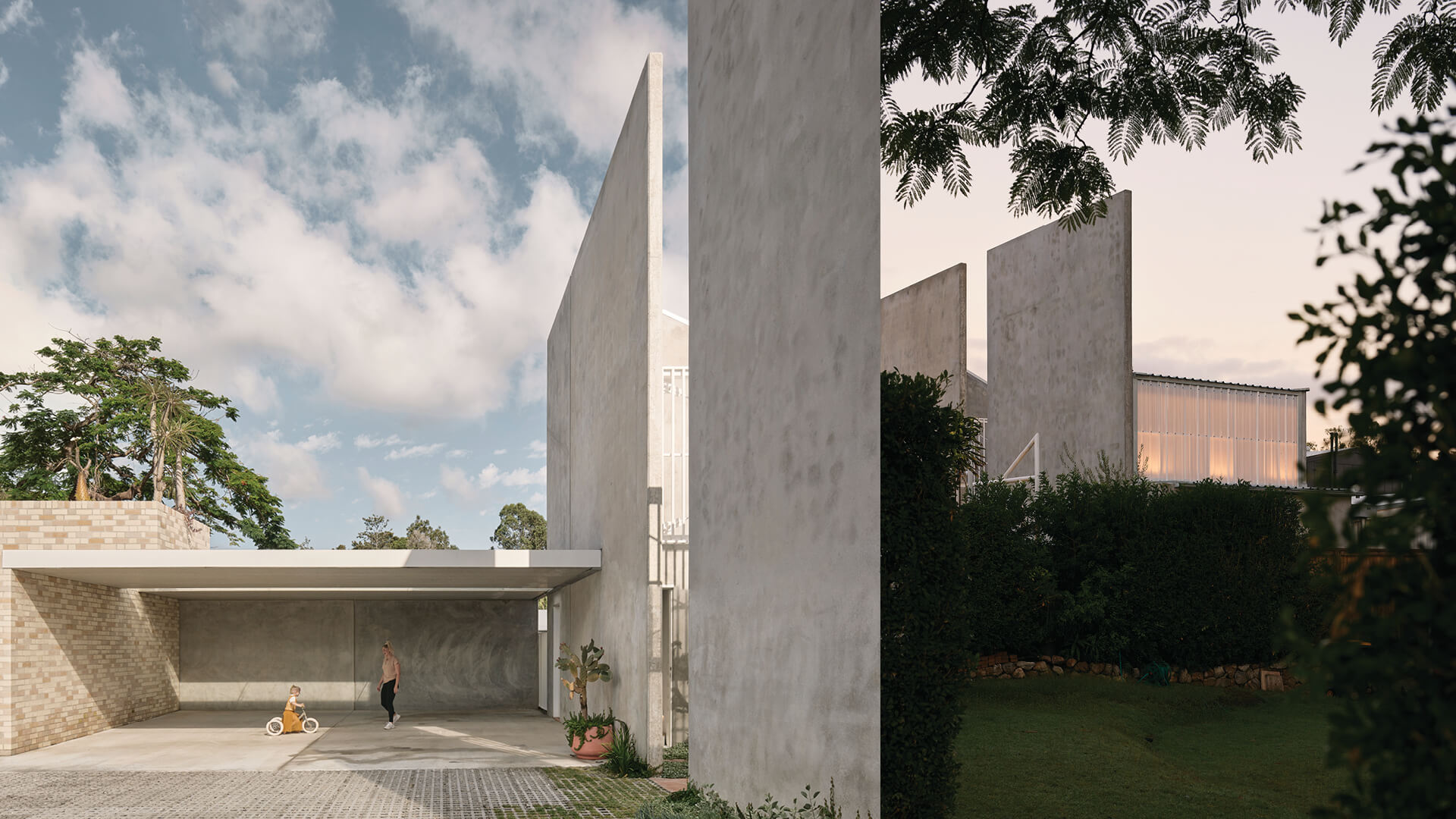 Is a ruin a beginning or an end in itself? Or is it endurance he silently embraces? A state in which the notion of something being born or lost forever does not exist? Essentially a reminder of the persistence of architecture, a ruin is an entity that thrives on memory and meaning. When Brisbane-based builder-turned-architect Christopher Furminger was commissioned to reframe an old timber house by the River Chelmer, he sought out a disputed projection of a dwelling – hinting at a ruin – to shape his design. A lover of landscape and materiality, Furminger transformed the house into a large walled garden that paves the way for new journeys and connections of architecture with its site.

Furminger’s approach to the materiality of the Chelmer River House cut through the fact that concrete and earth are familiar materials to clients who have worked as building contractors in the construction industry. His own penchant for structural details, materials and finishes contributed to the final design where a heavy skin of concrete and masonry is seen enveloping the house’s lightweight enclosures.

As one enters the property and slowly walks towards the entrance of the house, the monumentality of the form slowly dissipates into the humility of the small courtyard gardens drawing you into the domestic spaces. The heaviness of concrete and brick turns into soft green pockets framing different rooms in the house. The idea of ​​enclosing the house in its landscape, according to Furminger, was to allow nature to slowly reclaim the site over time. The low site with its proximity to the river will see transformations along the way, however, the solid presence of the hard enclosure will ensure that the house is ‘reduced to what lasts’.

Against a singular solid form of the house, Furminger chose a fragmented volume resulting from the multiple points of connection of the architecture with the outside. The floor plan reveals a series of small apartment-like accommodations with separate entrances, private gardens and flexible services. “The building,” shares the architect, “can be used as a family home, adapting to change as children grow, parents age, but it can also accommodate non-family residents, or those who work from home, with a freelance office or studio.”


The construction of the dwellings follows the use of an inventive tilting system of precast concrete panels which also ingeniously incorporates the plumbing and electrical services within it. The garden-turned-path landscape is clad in permeable pavers made from a mixture of river and plantation stone. Inside the house, wood and natural stone surfaces and textures create a beautiful contrast to the gray coarseness of the outer shell.

Furminger developed a synchronous harmony and contrast between old and new by using the landscape as an entity just as important to the project as the building. Blending the dexterity of a craftsman, the precision of a builder and the vision of an architect, there was one more role he pursued. “Our way of working was more like that of a sculptor. This allowed us to change and adapt our design in a more organic way,” adds the builder and carpenter turned architect.

Far from the conventional image of how a house looks, Furminger’s idea of ​​creating a wall to hide in what is often gloriously shown, is certainly hard to ignore. Could this be the start of a new wave in residential architecture, we ask?