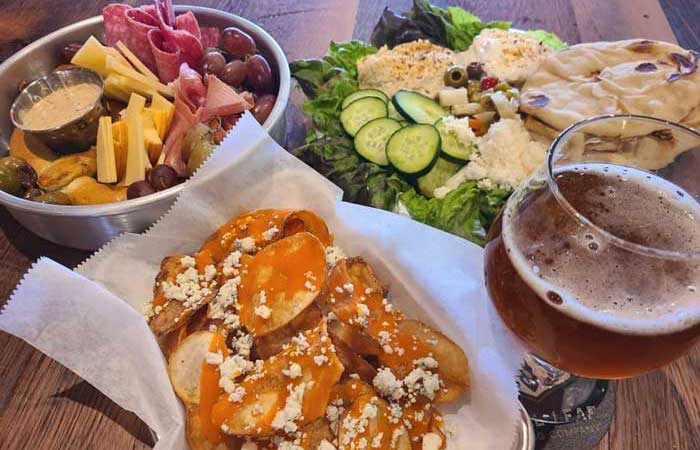 Opening a business is a long and difficult journey, but the ordeal to open Steel Leaf Brewing has reached epic levels in ancient Greece.

Before moving to the former site of Dave & Buster in the Eastern Hills Mall, owner Jeff Pitts embarked on a journey that takes The Odyssey look like a walk in the park. When the brewery’s doors finally opened on April 29, it marked the end of a seven-year journey that included searching four different locations in Western New York, including a closed retail site. in Allentown and a former Funk Lawn Care site in West Seneca.

Along that journey, Pitts and his team have built a following on social media, hoping to one day serve those potential customers.

“People who know Steel Leaf have heard of us through social media challenges or our public adventures trying to find a location for the brewery,” Pitts admits in a recent conversation with us.

Pitts says he couldn’t have reached the end of his brewery’s long odyssey without the help of the local brewing community. When pressed for one or two of his biggest helpers, Pitts refuses to name just one helper, saying he’s gotten help from many different people in different positions at local breweries.

“When we say Buffalo is the city of good neighbours, it couldn’t be more evident when looking at our local brewing community,” he says. “From a mentorship and guidance perspective, so many breweries have taught us along the way.”

Like other brewers, Pitts likes to talk about beer and he says Steel Leaf will seek to distinguish itself through unique beers. Right now, the brewery is developing beers based on classic American desserts like Strawberry Shortcake and Orange Creamsicle. Pitts stresses that the focus will be on developing unique beers that are most likely to have broad market appeal.

“We’re experimenting with things that we think will become an amazing product,” he says. “We want to do something different while being close to what most people are looking for in a beer. We want to be a place where people come for a specific beer; one they can only get from Steel Leaf.


With 35,000 square feet of space to explore, Steel Leaf is more than just a place to grab a beer. An “indoor park” area offers games such as Kan-Jam and cornhole. There are also bowling alleys left over from the old Dave & Buster’s.

Like the beer menu, Steel Leaf’s food menu is designed to be different yet accessible. Pub sandwiches and smash burgers will appeal to most people. The Mezze board and plant-based options are designed to appeal to those with specific dietary interests.

Local wine and spirits are available in addition to house beer. The service format is fast and casual. Orders can be placed at the bar and then the food is run out by the serving staff. This format is well suited to a place like Steel Leaf, where customers tend to wander.

Unlike some other local breweries where investment owners take a hands-off approach, Steel Leaf is owned by a brewer and Pitts emphasizes that he is intimately tied to the brewing process. This makes the brewery more responsive to what customers are saying, Pitts says.

“We’ve seen many examples of local breweries with well-managed and capable self-ownership, but I think being brewer-owned makes a big difference,” he says. “A lot of people know what kind of hops the beer contains. They know what specific yeast they are looking for in a beer. Being an active part of the brewing process, I can take what customers are saying and bring that feedback directly to the brewing process.

“I love having conversations with people who are interested in what’s going on in beer,” he adds. “It’s a job that excites us all in the region.”

Steal Leaf Brewing is located in the Eastern Hills Mall in the old Dave & Busters. Steel Leaf specializes in making homebrews that are different…

Want to share information or news with us? Send us a note!

Beginner gardening workshop on Saturday at PLAS – The Troy Messenger