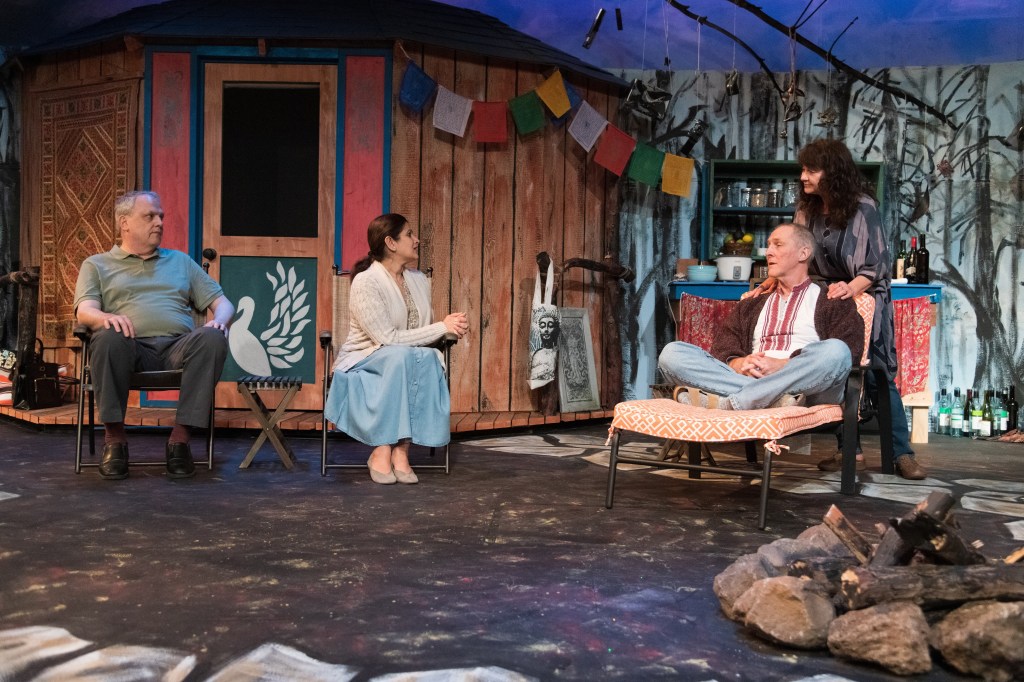 Two couples living very different lifestyles come together for a difficult but remarkable day in Jane Anderson’s “The Quality of Life,” which now plays at Alameda’s Altarena Playhouse through June 26.

Inspired by a scenario all too familiar to Bay Area residents, Jeanette and Neil lost their home in the Berkeley Hills to a devastating fire while dealing with Neil’s aggressive cancer. Jeanette’s conservative Midwestern cousins, still grieving their daughter’s violent death a year earlier, arrive to help. Soon, their differences become all too apparent as Anderson explores a myriad of ethical, religious, and moral beliefs in this powerful drama.

“It’s about love, commitment, strength and forgiveness,” director Katina Letheule wrote on the show. “The two couples are so different, rigid in their beliefs and ways of life, but meeting them on this day definitely changes their direction.”

Luckily, Letheule found a cast capable of portraying the powerful emotions and finding bits of humor along the way. Seasoned veterans Ted Barker and Bonnie DeChan play Neil and Jeanette with Sindu Singh and CJ Smith portraying Dinah and Bill from Ohio. Each creates well-defined characters on multiple levels, with Barker displaying an understated charisma contrasting nicely with DeChan’s churlier, more drunken Jeanette. Singh was particularly effective as the calm Dinah with her soft, gentle voice contrasted Smith’s portrayal of the aloof and judgmental Bill.

The Altarena’s intimate thrust scene provides the perfect setting for Anderson’s examination of loss, love and forgiveness. R “Dutch” Fritz designed Jeanette and Neil’s yurt and front yard decorated with pieces of melted crockery, silverware and wine bottles turned into works of art. In fact, some of the “art” is from production sponsor Jim Price’s house that burned down in the 1991 Oakland/Berkeley Hills Fire.

Lighting designer Danielle Ferguson’s use of shadows adds its own vibe to the production, as does the work of sound designer Michael O’Brien. I swear the coyote cries he uses are the ones I hear in my own hills! For tickets, go to www.alternena.org or email [email protected]

San Francisco: Bay Area audiences will once again appreciate the talents of Renee DeWeese Moran as she returns to the stage in 42nd Street Moon’s “Pajama Game,” which runs June 2-19 at the Gateway Theater in San Francisco.

The Walnut Creek resident took a 10-year break to start her family with husband Brendan Moran. They now have three children, Keenan (10), who recently appeared on 42nd Street Moon’s “The Fun Home,” Molly Jo (8), and Dominic (5).

“To play the role of Gladys and choreograph the show is a dream come true for any dancer,” Moran said. “To pay homage to the original work of Bob Fosse, which was his choreographic debut on Broadway, is an honor. Working with a group of very talented and kind artists, this project has been one of the most positive experiences of my career.

The busy mom also finds time to be the executive director of the Performing Academy, which she founded and which produced “The Music Man” at Walnut Creek’s Lesher Center this spring with more than 70 youth from Lamorinda Schools.

It’s exciting for me to see Moran and the Potters become such talented professionals. I first met Moran (then DeWeese) as a 14-year-old dancer in “Follies,” and saw the Potters rehearsing at the Willows Theater, where their mother, Judy, was the photographer when they were at the middle School.

“What makes ‘The Pajama Game’ great theater is that many of the themes that resonated in the 1950s still resonate today – workplace romance, clashes between management and workers and the great struggle of the middle class to do more than just get by,” said Executive Director Daniel Thomas. “We are fortunate to have been allowed to adapt portions of the script, using material from the 1973 and 2006 revivals as well as our own revisions, to ensure that the romantic leads each receive equal strength and difficulty.

“Working with playwright Annie Potter, we’ve strived to make the most dated relationship aspects of this decade’s musical contemporary, while holding on to the fantastic music, iconic songs and incredible dancing that left an indelible mark on the American theater.”

Castro Valley: For the first two weekends of June, Plethos Productions will bring the beautiful folk tale “Once on This Island” to life under the stars at TwiningVine Winery in the Castro Valley.

Based on Hans Christian Andersen’s ‘The Little Mermaid’, the musical tells the story of a peasant girl named Timoune who makes a deal with the wayward gods to be with her love, Daniel, who lives on the wealthy side of the island. .

The Tony Award-winning musical features Afro-Caribbean beats and includes a gospel-infused score. Salim Razawi directs the Plethos production with Curtis Manning as choreographer and Shyanna Bryan as vocal director. The musical plays June 3-5 and June 10-12. For tickets, go to plethos.org.

Sally Hogarty can be contacted at [email protected] Read more of his reviews online at eastbaytimes.com/author/sally-hogarty.

Picnic Ideas Everyone Will Envy