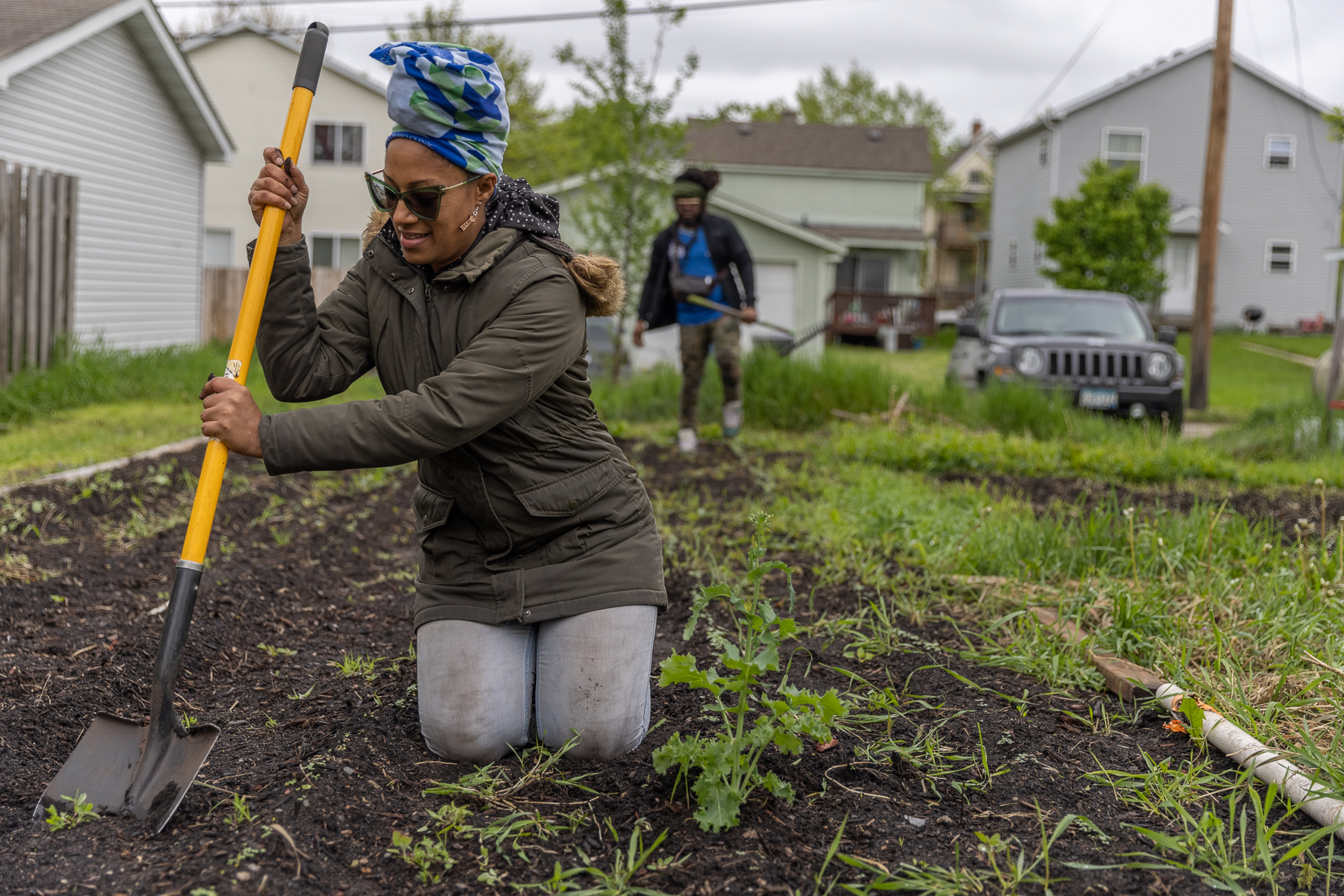 Vacant lots in north Minneapolis are reborn into bountiful gardens

At first, it’s hard to spot the garden at 2131 Penn Avenue N. in the Willard–Hay neighborhood. From the sidewalk, it doesn’t look much like the other vacant lots interspersed with houses along the street, especially in the early weeks of the growing season.

But when Queen Frye appears in her gardening attire — dirt-stained jeans, funky sunglasses, and wooden earrings with the word “RESIST” engraved on them — the court comes to life.

The land sat vacant for 15 years until Frye, an accountant, and Michael Kuykindall, a hairstylist, turned it into R. Roots Garden in 2019. The couple saw an opportunity to give back to the neighborhood Frye grew up in creating a direct link to healthy food and community gathering space. They also wanted to carry on the gardening legacy of their mothers and grandmothers.

Recently, in late May, rows of bright green seedlings were taking shape, forming rows of mustard greens, cucumbers, zucchini, kale, peppers and hot peppers. Frye pointed to a corn patch, a garden plot for nearby high schoolers, and a section for new experiences — eggplant, artichokes, and celery. A rain barrel collects water and a compost system collects yard waste. Plus, there’s a lot of green cabbage.

Across Minneapolis, gardens have been popping up in vacant lots with increasing frequency. The city now encourages sanctioned vegetable gardening in nearly every available location, from park-owned land to community gardens to abandoned or vacant lots.

The city’s garden lease program leases approximately 60 vacant city-owned lots to grow food at $1 per year per lot plus a one-time fee of $50. The program began in 2010 with approximately 20 lots, and changes to zoning laws in 2011 allowed for more urban agriculture. (R. Roots Garden includes four vacant private lots and is not part of the city’s program.)

Minneapolis’ 2030 climate action plan will include a goal for a yet-to-be-determined number of gardens, with most clustered in green zones. (Green zones are areas that the city has designated as places of concern, due to environmental issues such as poor air quality.) Much of north Minneapolis near the Penn Avenue Garden is listed as a green zone.

“Gardening and urban agriculture improve soil quality, and it’s important that the climate supports local food,” Rude said. “It’s much better to have food grown on the side with less pesticides and less transportation.”

That first year, Frye and Kuykindall hauled fresh dirt. They determined which seeds to plant and how important it was to share the experience with the community. They are looking to expand again by buying a farm outside the town of Peace, Minnesota.

Frye leaned against the rain barrel and explained his philosophy of sustainable permaculture gardening.

“More than cultivating a garden”

Frye and Kuykindall rely on volunteers to keep the gardens healthy. But getting people excited about weeding can be tough, Frye said with a laugh, so much of the early-season work falls on them. She doesn’t care about work, but she thrives in the community.

“It’s more than just growing a garden,” Frye said. “It’s about building relationships, learning people’s food stories, and giving them access to better options and even a better way of life.”

Kuykindall remembers the green tomatoes his grandmother and great-grandmother grew in Chicago, in a small garden patch. Frye introduced him to gardening on a larger scale, and he soon returned to physical labor, earning him the nickname Mic the Tiller.

Now Kuykindall plans to plant sunflowers and herbs (hibiscus, peppermint, sage and lavender) to use in the development of her own hair products. He works as a stylist at the From the Roots salon in Saint-Paul.

Frye grew up in north Minneapolis, not far from R. Roots Garden on Penn Avenue. As a little girl, she learned gardening techniques from her mother as a way of life, without understanding the health and community benefits. As an adult, she says, she began to wonder where she could get healthy food in her own neighborhood and realized that building gardens was an act of resistance.

“It’s our way of saying, ‘Enough is enough; we have to stop the madness and give people the opportunity to feed themselves,” she said. “It’s a way to create that local access stream so you can make the choice about your health, to overcome the racial biases in city design that predispose us to unhealthy eating behaviors.”

Often, Frye said, people think a susceptibility to high blood pressure, cardiovascular disease or diabetes is in their DNA.

“We’re trying to share the knowledge to make people aware that it’s not in your blood or your bones,” she said. “It could be due to the way the food is systematically designed in our neighborhood, predisposing you to unhealthy eating habits.”

At their home in Plymouth, Frye and Kuykindall began experimenting with a greenhouse they call their “R. Roots, Jr., lab. Last season, they saved seeds from their pepper plants.

“We started them as seedlings and these things sprouted and popped up, and I was like, ‘Get out of town! Frie said. “If this continues all season and we actually reap the rewards from it, we will have an ongoing legacy. I can’t wait to see the fruits of it. I think I might cry, Mic, when I see this.

“I just feel like I can do it,” she said. “And if something were to happen – like things stopping – I can always feed myself, and it’s so important to have autonomy over what I can put in my body. It’s like ultimate survival .

Frye stops to pat dirt around turnip greens. This makes him wish more people knew about their gardens. This week’s Wednesday volunteer morning was rainy, but garden volunteer Donyele Cook shows up anyway on Thursday morning.

“People don’t bring a lot of life to the Northside, so I think it’s important to show people that there are people who care and try to do things in the community,” Cook said. “When you’re in new growth, it helps the environment you’re in. And it’s something more to get out there and get your hands dirty.”

Frye and Kuykindall surveyed the yard, knowing that it will soon be teeming with vegetables and that in August and October it will be the site of harvests and community celebrations with talk, music and breakdancing.

But they also fully appreciate the garden in its current state, despite the dandelions.

“I like all the stages,” Frye said. “I think it’s beautiful.”

Frye’s family wanted to reflect the changing nature of the gardens on behalf of the nonprofit enterprise. At a family gathering to name the garden, everyone kissed “R. Root Garden.” You just filled in your own blank, which [the R] means to you,” Frye said. For Frye and Kuykindall, any given day can mean Rest, Relaxation, Redemption, Reason, Revolution, or Recovery.

Other urban garden projects to get involved in:

10 Best Summer Outdoor Toys and Games for Kids in 2022