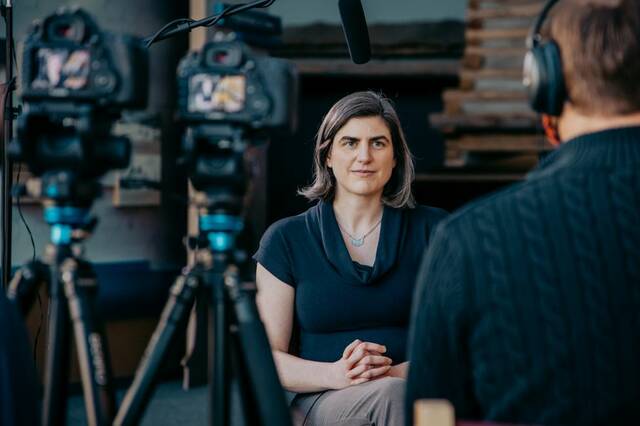 Lovejoy was an abolitionist, fiercely opposed to slavery, who published anti-slavery opinions in his newspaper, the Alton Observer. He became the first martyr for press freedom and is considered by some to be the “first victim of the civil war”.

A drunk and angry mob murdered Lovejoy on November 7, 1837 at the Godfrey & Gilman warehouse in Alton. The mob smashed Lovejoy’s fourth printing press and threw it into the Mississippi River.

The yoke of this printing press, which was found and removed from the river in 1915, resides in the Hayner Genealogy & Local History Library.

The Lovejoy Memorial Committee will be holding their annual Lovejoy Day event at noon on Tuesday, November 9 at the Lovejoy Monument in Alton Cemetery. The program will include guest speaker, Associate Judge Veronica Armouti; a welcome by Phil Trapani, Lovejoy Memorial Board; the presentation of the flags by the honor guard of the post # 354 of the American Legion Allen Bevenue; invocation and blessing by Rev. Bradley Donoho, pastor of Upper Alton Baptist Church; vocal selection by Lorian Warford; a proclamation from the Reverend David Goins, Mayor of Alton; and the laying of the crown by Ella Mae Fox, president of the Elijah P. Lovejoy memorial, and Edmond Gray, administrator of Lovejoy’s tomb.

“Martyr for abolition and freedom of the press. The Legacy of Elijah P. Lovejoy, ”which features Lacy McDonald, Director of the Genealogy and Local History Library, features many books and artifacts related to Lovejoy that can be found in the Hayner Collection.

At 6 p.m. on Tuesday, November 9, several panelists will discuss Lovejoy, the Mythic Mississippi Project, and the making of the film. Scheduled panelists include McDonald, Silverman, Hunter and Gray, as well as Rivers and Routes Tourism Bureau chairman Cory Jobe and Route 3 Films creator and owner Ryan Hanlon.

To register for the event online, visit https://illinois.zoom.us/webinar/register/WN_m_j0s-p3S6OZ1YC8FX9JtA.

The film will also be available # 10 on the Hayner Public Library District Facebook page at https://www.facebook.com/HaynerLibrary/.

The Hayner Genealogy & Local History Library is also co-hosting an online event with the Department of Journalism at the University of Illinois at Urbana-Champaign at 6 p.m. on Wednesday, November 10 featuring author Ken Ellingwood discussing his new book, First to Fall: Elijah Lovejoy and the Struggle for a Free Press in the Age of Slavery.

To register for the event online, visit https://illinois.zoom.us/meeting/register/tZAqceGqpzMoEtGHE3ToFygYHs00W7KN2EcS.

Ellingwood is a writer and longtime former Los Angeles Times correspondent. He spent his early years as a reporter in Waterville, Maine, near Lovejoy’s childhood home. He now lives in Vermont with his wife.

Nancy Gibbs, former editor-in-chief of TIME, wrote in her review of First to Fall that it was “an exploration of fundamental American principles – the power of individuals, the fearless defense of a free press and the deeper values ​​of equality, justice and speaking the truth at all costs.

“Fascinating in itself, this story is also an invigorating parable for our time,” she wrote.

The master gardeners will organize a training event